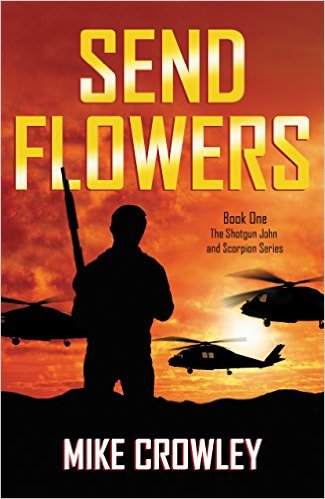 John Griffin returns to work one night to find the pharmaceutical lab he manages engulfed in flames. Together with the office’s secretary and lead scientist, John learns the source of the fire and promptly lands on the government’s terrorist kill list. On the run, John and his coworkers try to develop the cure while the military and the CIA use the full power of the U.S. anti-terror machine to stop them.
With the help of a freshman congressman and a few well-placed special forces, John, Pete and Raquel are forced to confront CIA contractors, political donors and the politicians they support. Along the way, John realizes that not even his allies’ motives align with his – getting home to see his wife.

SEND FLOWERS is a non-stop adventure pitting left against right, soldiers against contractors, and citizens against special interests in an all too plausible world where corporations decide who the CIA tortures and kills. The odds seem insurmountable until this small group of committed citizens starts to fight dirty too.

Powerful Short Prayers For People On The Go By: George H. Oliver