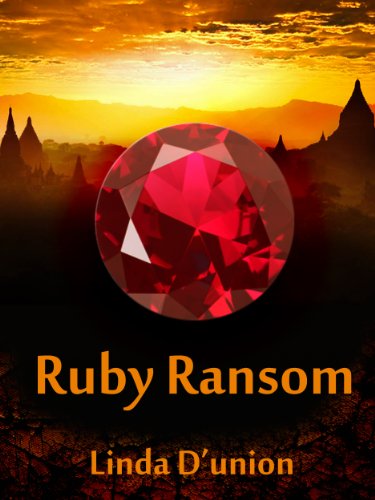 Rachel a young medical nurse feels compelled to save a patient’s child from captivity. Travelling halfway across the world transporting the ransom to save the child, she faced many dangers and in the process of risking her life falls in love – a love destined to ….‘Ruby Ransom’ is a mystery thriller with a medical and romantic theme complete with an unexpected outcome.It begins with Rachel, a young woman, during the course of her role as a nurse in a hospital struggling with a professional ethical dilemma. Should she own up to what she found among the belongings of a patient when she realised she had unconsciously omitted to log them as per hospital protocol. Or should she trust her instincts about what she uncovered and in the young man. The suspense around waiting for him to awaken and alleviate her concern was almost unbearable.The young man, Derek, admitted to hospital unconscious from a head injury following an attack on his life, holds the key to Rachel’s ethical and moral dilemma and upon recovering consciousness is instrumental in changing the course of Rachel’s life.A break-in of the hospital safe, the theft of Derek’s clothes from the ward and Rachel’s bedroom being ransacked indicates that Derek’s attacker is still looking for something he desperately wants. Alerted of these events Rachel began to feel anxious that her life could be in danger through inadvertently becoming the temporary custodian of Derek’s property. Luckily the intruder who searched Rachel’s room did not find Derek’s precious items.Upon Derek’s awakening, Rachel, a romantic at heart, through trusting her instincts about Derek, finds herself drawn into helping him in his quest to save his kidnapped child – Scott. Although Derek has an idea as to the reason his child has been abducted; who the abductors are remain a mystery. He just knows that they are in Burma (Myanmar). To free his child through paying the ransom demanded requires him to travel to Burma and hand over his uncle’s precious heirlooms. In asking for Rachel’s help to save his child he sets in motion a course of events that lead himself, Rachel and Max, the grandson of a rich Australian exporter based in Thailand, into danger and a remarkable journey of fortitude, love and courage.The book is a fine combination of mystery, thriller suspense with an island setting and a romantic, medical theme. Perfect for fans of Sidney Sheldon.