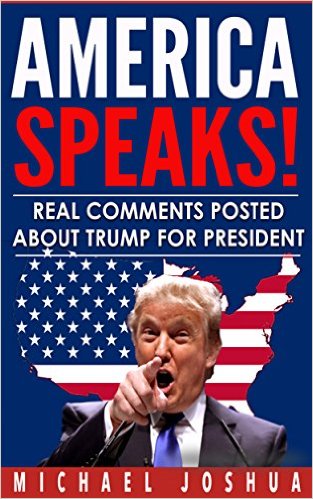 What do Jim Nelle, Clint Eastwood, Bill Raine, Sara Palin, Charlotte Laws, Eugene Spektar, and Omarosa all have in common? They are just a few of the people quoted in this book that support Donald Trump for President of the United States.
Although there are hundreds of Americans who are against Donald Trump for president, this book is a quick read that is meant to be unbiased by providing quotes of Americans both for and against Trump for President in 2016. This book provides you with actual comments that have been posted online regarding all aspects of the presidency. From Foreign policy and dealing with China, to immigration and border control, the quotes in this book all discuss what Donald Trump is saying he will do and what the person posting feels about.

Are you on the fence about him and don’t have time to read through tons of blogs or a 400 page novel about him and his ideas? Then this book of quotes on all aspects of the presidency and how Trump feels on them is what you need!