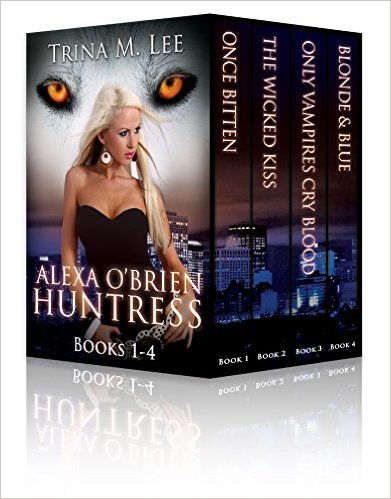 Alexa, a werewolf with an unusual power, is forced to face the monsters of her past and the uncertainty of the future after mysterious vampire, Arys, awakens the darkness within her.

Alexa O’Brien has never been like other people. A hunter of supernatural rogues, she is a werewolf with unusual but extraordinary power. Power that draws her to Arys Knight, the mysterious vampire who awakens her dark side. What they create together is dangerous and binding, forcing her to question the source of her abilities. It threatens not only her remaining humanity, but her relationship with fellow werewolf, Shaz Richardson, as well.

When Alexa’s womanizing former lover and the Alpha of her pack is framed for murder, he draws public attention that could earn him a death sentence unless she steps in to help him. Alexa would love to watch karma at work but as the body count rises, long buried secrets are exposed. She’s forced to face the painful truth that not everyone is who she thinks they are.

Alexa O’Brien is a magnet for trouble. Due to the power she shares with bad ass vampire, Arys Knight, power hungry creatures are eager to get a taste of her. That includes Arys’ sadistic sire, a vampire that sees her as a toy, perfect for his personal collection. If he doesn’t kill her, she just might wish he had.

Alexa is in danger, something her wolf mate Shaz blames entirely on Arys. The tension runs high when an argument blows up into a full physical confrontation between the two men. Alexa learns there is one way to protect herself from those who see her as a walking, talking power trip. Now she is faced with her biggest decision yet.

But can the two men she loves put aside their differences when it matters most? Because this is one sacrifice that will forever alter her very mortality.

Alexa O’Brien has more power than she can handle. A werewolf bound to a vampire by a force bigger than the both of them, Alexa is feeling lost. Desperation drives Alexa to make a deal with the one person who can guide her, a man she loathes, Harley Kayson. He just so happens to be the sire of her vampire lover, Arys Knight. To say Arys is pissed about this would be putting it lightly.

Conflict threatens to destroy what Alexa and Arys share. Due to their eternal bond, they can never truly walk free of each other. When Arys teams up with his sire to revisit their sordid past, the pain he and Alexa inflict on one another rises to a scathing boil. Alexa comes to realize that her only solution is to fulfill Arys’ greatest wish and worst nightmare, regardless of the consequences.

Bloodlust and power. Werewolf Alexa O’Brien is a slave to them both. As she falls deeper into the seductive embrace of blood and death, the dangerous desire is encouraged by a forbidden attraction.

While trying to run the problematic local vampire hotspot, The Wicked Kiss, Alexa learns that someone is seeking the killers of its former owner. One of those killers just happens to be her. For Alexa’s vampire lover, Arys Knight, it takes a personal twist and soon becomes clear there’s something he’s not sharing. Something that could unlock the mystery of where their power comes from and why it is so deadly.

The Cedar by Carmen Butler