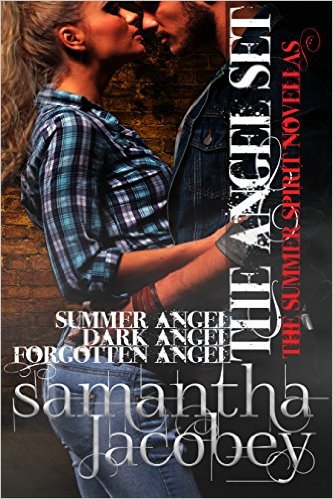 No one EVER had a summer romance like this. When Charlie visited another plane parallel to our own, he discovered that Summer Angels and Dark Angels battle over the fate of man. Faced with choices no one should ever have to make, his adventure has been fraught with twists and turns, with life and death hanging in the balance. His guardian, Clarisse, is the half that makes him whole, but sinister forces conspire to do more than simply keep them apart. Find out if they can stand up to the powers that be in this THRILLING MAGICAL ADVENTURE!!! (New adult)
Summer Angel – A Summer Spirit Novella… What would you do if you discovered Guardian Angels are real?

Charlie and his parents had planned a fabulous summer vacation; the last one before he heads off to college. Things go mysteriously awry when the young man meets Clarisse; he finds himself separated from his parents and on a different sort of holiday.

Caught up in a strange adventure with the slender blonde, Charlie learns right away that things are not what they seem. She easily convinces him that her magical powers are real, and introduces him to a world mankind has only dreamt of. Promising to have him reunited with his family soon, the girl takes him on a gallery walk of life, using her abilities to give him a summer vacation he will never forget… and then again, may not even survive.
Dark Angel – A Summer Spirit Novella… Can your Guardian Angel simply walk away?

Charlie and his girlfriend met last summer, after his awakening from a near death experience. Their love grew while his body healed, and after a few short months, he had come to believe she was the girl of his dreams. But Donna has a secret; one she had never intended to share with the love of her life.

While Charlie’s physical being had lain in a hospital, his spirit had traveled to another dimension – her world – where the forces of light and dark collide. When he had returned to the living side of consciousness, Clarisse stole Donna’s body, claiming it and giving herself a second chance at life and love. Of course, people who die are meant to stay dead, and there will be rough times ahead as Keeper, head of the angels, decides how to put things back in order…
Forgotten Angel – A Summer Spirit Novella… Can love transcend death for a Guardian Angel?

When Clarisse took her own life, she wanted to spare Charlie’s suffering at the hands of Gous. He watched her die in a most gruesome fashion, and had to learn to live without the girl of his dreams in the physical sense. Instead, he managed to maintain contact with her, and brought new meaning to the term ‘long-distance relationship.’

In the weeks following their separation, Charlie returns to his home town. A commanding presence, the temptation to meddle in the lives of those around him becomes overwhelming. as does Clarisse’s desire to interfere with his. Tempers flare, and the girl flees, leaving him at the mercy of Gous and the dark path that lays before him. By a twist of Fate, Charlie’s world spins further out of control, and he sets off to find her on what could be his road to redemption. Will their love survive when he discovers the truth about his abilities? Or will the powers that be finally claim their forgotten angel…

Get your copy now

NEXT!: The Search for My Last First Date by Robert James

Genesis: An Inspiration by Stefan Emunds