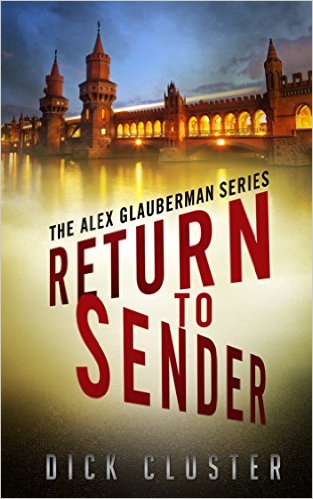 HE WENT TO THE POST OFFICE…AND ENDED UP IN BERLINMeet reluctant detective Alex Glauberman—just a guy who fixes foreign cars, a 41-year-old divorced father with a brilliant British girl friend. But he’s got a complication right now—he’s trying to survive chemo. And then Gerald Meyer, a stranger he meets at the P.O., asks him to mail a package to Meyer’s daughter. Easily done, but too late, Meyer changes his mind.

And turns up dead.

But now the package is gone, and clearly dangerous! Will Meyer’s daughter be the next victim? Worse, is Alex about to be arrested for murder? Out of those fears is born Alex’s career as an international detective—because the stranger’s daughter lives in Berlin, and he doesn’t know how to contact her.

Too intrigued to let it go (and also because he’s a mensch) Alex sets off on an adventure that takes him to London and Berlin in the last years of the Wall, in a search for package, perpetrators, and to prove his own innocence.

Along the way he’s plunged into the wreckage of Gerald Meyer’s life, a wake that includes the daughter, half-German and half-Jewish, as well as an underworld network, unusual banking transactions, blackmail, shadowy neo-Nazis, and a city in which, as Meyer’s daughter puts it, “Under all the showy stuff, Berliners are frightened of so many things.” Police detectives in two countries don’t make it any easier, but Alex learns to cope, trading bits of information while explaining his actions with metaphors such as the Yiddish meaning of his family name.