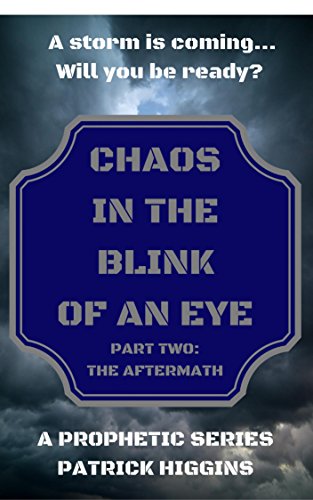 Synopsis from the first installment of the series, Chaos In The Blink Of An EyeOn a cold, blustery, snowy Saturday in late November, more than 111,000 people were crammed inside Michigan Stadium, in Ann Arbor, Michigan, to watch the Michigan Wolverines play the Ohio State Buckeyes. It was a heated college football rivalry that had spanned more than a century.No one inside the stadium was prepared for what would soon unfold. As the football was kicked into the snow-filled sky to start the game, long-foretold Bible prophecy came to pass right before their very eyes, causing many to suddenly vanish into thin air. Players disappeared! Coaches disappeared! Members of the media disappeared! Members of both marching bands disappeared! Cheerleaders disappeared, along with many fans in the stands.In the blink of an eye, the football game was suddenly insignificant. Fear and panic filled the hearts of everyone still inside the stadium. People screamed hysterically and wept uncontrollably, clinging to their departed loved one’s clothing and other effects. But their bodies were nowhere to be found. Many were too afraid to move, for fear that they, too, would vanish.But what happened inside Michigan Stadium was only a drop in the bucket compared to rest of the world. In the blink of an eye, life as humanity had known it was forever changed when the Great Disappearing Act came to pass. Those still remaining were about to experience the greatest cataclysmic events to ever rock Planet Earth…