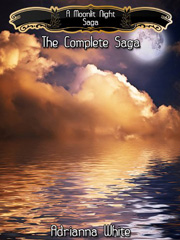 Life’s never been ordinary for Emily Johansson, or her brother, Steven. They lost their parents at a young age and have been fighting to stay together ever since. Their world changes with the arrival of several ghouls, late in the night and masked under the cover of darkness. While they’re rather harmless themselves, these ghouls come with an even more frightening secret— vampires are real and they’ve already descended upon the city of Georgetown.

They’re looking for something, long since vanished and resurfaced in the most unlikely of places. The vampire hordes still stop at nothing, until they’ve utterly destroyed that which they’ll never truly understand.

It’s something Emily’s going to need to try and understand if she wants to keep the monsters at bay and survive the night. She’s going to need friends to do that, friends from the very same paranormal realm that’s hunting her. It’s a race against time and she’s going to need all her friends and allies to fight back the darkness with her and triumph of the vampire queen’s horde.

Start from the beginning at no cost – A Moonlit Night #1 is currently FREE!