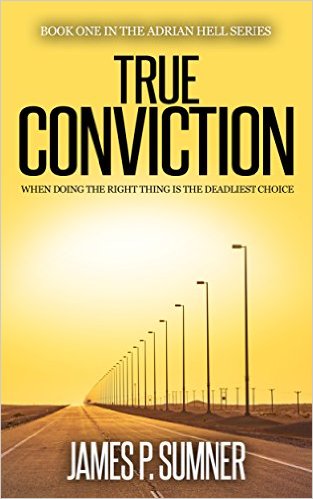 A break-neck thriller that will have you ducking bullets and dying to turn the page!
Meet Adrian Hell, one of the deadliest professional assassins to ever pick up a gun.

In True Conviction, he takes a job in the sun-soaked city of Heaven’s Valley, a paradise of sin and the jewel of Nevada. His contract? Kill a man who has stolen from the local mob boss. Sounds simple, right?

The job quickly turns sour, and Adrian discovers a much larger threat looming in the shadows. He finds himself in the crosshairs of a powerful adversary, and he must use his skills to survive long enough to stop a terrorist attack that could act as a catalyst for another world war.

Adrian is pushed beyond his limits, tested to breaking point, and forced to overcome tremendous odds in order to do what’s right in this fast paced action thriller… even if it means going against his killer instincts. Filled with dark humour, relentless action, and thrilling characters, this is THE next premier series for fans of a fast paced thriller with a strong anti-hero at its core.

The Swan Dancer by Remy Blue