This interview is with Marc Cavella, author of Tabernacle, a dark sense of humor, mystery Western.

Great to chat to you Marc about your book, Tabernacle in Kindle and paperback format. Let's start with sharing something interesting about yourself to our readers?

MC: I played in, and wrote songs for, a rock band in my mid- to late twenties. I also have two master’s degrees: One in general/research psychology, and another in clinical psychology. I actually dropped out of a clinical psychology doctoral program so I could focus more on writing novels.

PeB: An interesting background and congrats on your two master’s degrees. How long have been writing?

MC: I’ve been writing professionally for over twenty years across a broad range of fields—business, research, movie and television criticism, et cetera. And I’ve written fiction recreationally since I was in high school—short stories, flash fiction, things like that. But I never really wrote anything longer than that until I turned thirty. I didn’t have the discipline and patience that you need to write a novel, let alone write a really good one. But as I’ve gotten older I’ve gotten more disciplined about the process and now I hope to keep writing novels at a fairly regular pace. 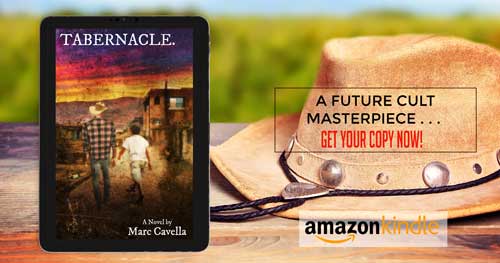 MC: I don’t get to read a lot, unfortunately. I don’t have a ton of spare time and when I do I usually spend it writing or working on things related to my books. But the most recent book that comes to mind was Lincoln: The Biography of a Writer, by Fred Kaplan. It’s a great read that explores Abraham Lincoln as a person through his various letters, speeches, and other writings. I’m a huge history buff, so that one really appealed to me.

PeB: An insight into Lincoln's writings in life will be fascinating read, one on my wish list. Back to your book, what three words describe Tabernacle?

MC: People have told me that it is dark, unique, and wry. All of those are huge compliments in my opinion.

PeB: What inspired you to write your book?

MC: I sort of stumbled into it by accident about twelve years ago. I was reading some articles about insurance as part of a work project when I came across an article that said people in the Middle Ages used to take out insurance policies on random strangers, name themselves as the beneficiary, and then murder said strangers to collect the policy’s death benefit.

I don’t know if that story is true, but I was fascinated by that whole idea since it seemed really insidious to me. That was pretty much the starting point. But I sort of flipped the whole thing on its head a little bit, and that was basically the genesis of Edward Jones. Tabernacle flowed from there.

PeB: The formative age of European literature and maybe the shaping of insurance claims. Can you tell our readers more about the Edward Jones?

MC: Tabernacle tells the story of Edward Jones, a wildly successful salesman who sells a product that none of his clients actually wants. It opens with Edward being assigned an incredibly difficult client in Jared Young, a Mormon schoolmaster with a beautiful wife and family living happily in the Texas panhandle. As Edward says, the happiest people always make for the hardest sales, but he’s determined to do whatever it takes to make sure he earns his commission. But beyond that, I think the book asks some deeper questions about fatherhood, community, and the delicate nature of goodness.

PeB: Was Edward Jones inspired by a real person?

MC: Edward Jones wasn’t inspired by a real person, per se. I certainly hope there aren’t people like him walking around out there, but unfortunately my guess is that there are way more of them than I think—he’s charming, but he’s also destructive and devious. But Edward’s diction and dialect were partially inspired by Nicolas Cage’s character H.I. McDonough from the movie Raising Arizona and Hank Hill from the cartoon King of the Hill.

PeB: If your book was to be made into a movie, who would be the celebrities that would star in it?

MC: Ha! I’ve actually thought about this on more than one occasion. I think that maybe a scruffy Jake Gyllenhaal would be a good choice to play Edward Jones, or a Chris Pine type. Maybe Casey Affleck. Someone who can really disappear into a character and not bring too much attention to himself, because Edward Jones is supposed to be an “Everyman” type of character. And I wouldn’t be upset if Ryan Reynolds and Blake Lively teamed up to play Jared Young and his wife, Whitney.

PeB: What were the highlights of writing this book?

MC: This is the first novel I’ve ever finished. I’ve started one or two others but they never felt complete to me; I never considered them to be totally done, so to speak. So to be able to finish a novel and to consider it complete and to actually like the novel as well has been a real highlight for me. It’s a great feeling.

PeB: What is the future for the characters? Will there be a sequel?

MC: I have a few ideas on where the characters from this book can go, and I really enjoy spending time in their world, so I’m hoping to write two more sequels. I’m currently working on the first sequel, which is tentatively titled Place the Flowers. We see that Edward Jones has retired from his sales job, but he’s tempted to get back into it when a coworker offers to split an enormous commission with him. I don’t want to say too much more, because I’m not completely certain where the book will end up going just yet. But several of the characters from Tabernacle will make appearances.

PeB: Are you working on anything at the present you would like to share with your readers?

MC: Sure! As I mentioned above, I’m currently working on Place the Flowers, the sequel to Tabernacle. I’m hoping to release that around May of 2021. I’m also working on a novella called The Ballad of Ricky Risotto, which centers on a professional wrestling promotion in 1979, right around the time when those independent wrestling territories started dying out and getting taken over by the World Wrestling Federation. It’s a fun little novella that I hope will tide readers over until Place the Flowers is finished.

PeB: Where can readers find out more about you and your books?

MC: Readers can visit my website, www.marccavella.com, to learn more about me and my books and also on FaceBook.

PeB: Great to get to know you Marc and thank you for your time with the insider knowledge on your book Tabernacle, grab you copy now folks! 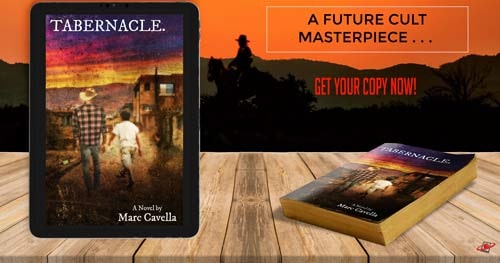 Planet eBooks and its subdomains are participants in the Amazon Services LLC Associates Program, an affiliate advertising program designed to provide a means for sites to earn advertising fees by advertising and linking to Amazon.com. Click here to view our full FTC Compliance Disclaimer

PlaneteBooks
Unit 11514, Manchester, M61 0BW, United Kingdom
Copyright © 2015 - 2020 PlaneteBooks | Best Selling Books To Read with Kindle Deals. Struggling to sell more books? Check our Author Marketing Services. All rights reserved.
By continuing to browse the site you are agreeing to our use of cookies