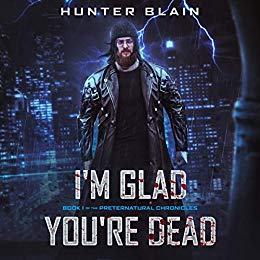 After helplessly witnessing the execution of his family, John is approached by a strange man that promises the power of revenge, for a price; his life for the ability to walk the mortal plane for eternity. Fast forward several hundred years where John finds himself with an unlikely ally, Father Thomes Philseep. Together, they have the holy mission of doing God’s will by protecting this plane from the nefarious evil that seeks the end of times. After centuries of feeding on mortal blood, if John’s blackened soul can get a little bleaching at the same time, well, all the better. Too bad the warlock, Nathanial Locke, who is a lackey of Satan himself, has other plans in mind for John. Despite his platinum tongue and razer whit, John might need some help from a supernatural buddy who has a hankering for meat and sheds in the winter.Follow John the vampire as he travels through the centuries learning his powers with his teacher, Ulric, and fighting to control his supernatural predatory side to use his powers for good.

The Untold Story of Cleopatra Revealed by Kimberly Jones