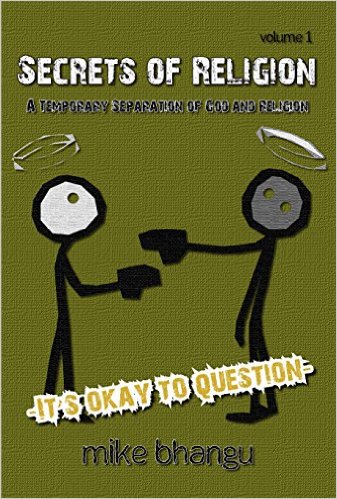 In the name of God: prophets were transformed into politicians, only some are God’s children, millions were and are murdered, and meaningless rituals were and are synthetically born.
In the name of God: The one world was divided into multiple, people are pitted against people, segments of the earth are holier than the whole, and buildings have more value than the Master.

Religions have behaved corruptly and that’s led many reasonable people to walk away from religion. However, as they turned their back, they unwittingly walked away from The Great Architect. Unable to distinguish between religion and The Formless, before examining the other religious doctrines to possibly fill-in the blanks created by the corruption, they claim that the entirety of religions are out-to-lunch and this idea of God must also be a false construct.

Religious corruption has inspired many persons to the cave of the agnostic. Some managed to crawl back out and others are still stuck in the darkness. Until a Divine intervention or thoughts reach an absolute conclusion, the cave will remain a truth within the mind of the betrayed.

To provide the first is not in my power, but with the second, I think I can help. Thoughts at a near-end tend to interpret the corruption as separate from the heavens, and the division provides a much more reasonable perspective. Religious practices and doctrine examined after the partition have the potential to reveal The Great Architect. “Secrets of Religion” provides ample examples of the corruption and I’m hoping those examples will frame the religious ethos that might not be truthful.

“Secrets of Religion” is a politically incorrect journey to determine what is what, and what is God oriented–before and beyond the many religious institutions. Here, you’ll discover what the different religions do not want you to know.

The Posse: A Crystal Cove Book by Tawdra Kandle