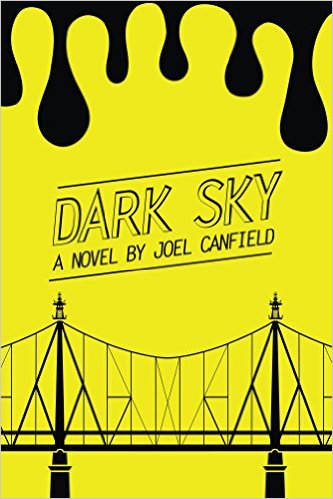 First Lieutenant Robert Davidson. The son of an American military legend and a war hero who died in combat during the Afghanistan conflict.
Or did he?

The answer could bring down a secret military empire – as well as a guy named Max Bowman.

Max is a rapidly aging ex-CIA desk jockey who gets the job of tracking down the truth about Davidson – but his chances of actually discovering it are about half of that of finding a horse wearing a kimono. What Max doesn’t know is that nobody wants the facts – and nobody expects Max to find them.

But Max has to pay the rent. So he takes on the job, which takes him on a road trip into the heart of America’s darkness as well as his own, where he has to deal with exploding homes, brutal murders, a sexy heiress, a misguided teenager and Max’s girlfriend back home who’s cursing him out on a regular basis.

And, oh yeah, a para-military organization that’s just waiting for the right moment to kill him.

It all happens in DARK SKY, a sardonic and suspenseful mystery-thriller in which an underwhelming hero must confront an overwhelming conspiracy – not to mention himself.

The Adventures of Sarah Ann Lewis and the Memory Thieves by Joshua C. Carroll