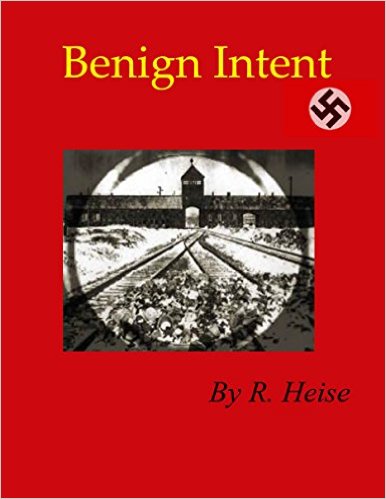 Benign Intent, this novel of 77,000 words, tells the story of Detective Gabe Taglio, a married ex-priest. Along with his partner, Paul Hannon, he finds himself challenged with bloodless, neat—and apparently random—murders in a small Ohio city. He and his partner explore the few clues, pursuing a solution to these various homicides; the murders include an adolescent boy, an abusive husband, and a beautiful young jogger. We are privy to some of the home life of the two detectives as they sift the confusing evidence, and pursue various leads that go nowhere. We meet a number of people whose connection with the murders do not lead to solving them.
In the meantime, in the dreams of a Holocaust survivor, the author revisits for the reader some of the actual horrors of Auschwitz, including the human menorah and random shootings. Eventually, Detective Taglio uncovers a single important connection that finally leads him to visit the Holocaust Museum in Washington, D. C.; there he reads a translation of a recently received diary, and now knows the killer—someone close to his family. Because of his heightened sense of morality, his awareness of the sometimes conflict of moral and legal guilt, he becomes hesitant—in turmoil—as to what to do.

Now aware of the details of the murderer’s background, conscious of his duties and the complexity of moral uncertainties, he has to confront both himself and the murderer–to resolve his dilemma.