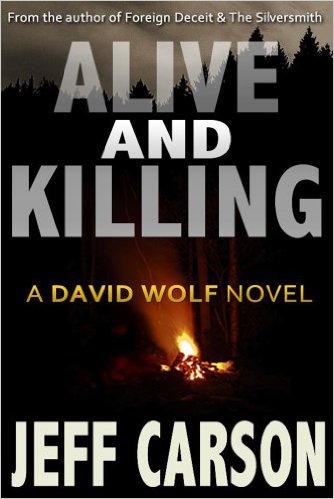 Just for a day, Colorado Sheriff David Wolf trades slogging through murky meltwaters and even murkier small-town politics for an overnight camping trip in the wilderness with his son.
But when a man with fresh burns turns up on their trail, falling from the heavy load in his backpack and running wild from something, Wolf suspects his father-son camping trip may have just taken a turn for the worse.

Unfortunately his instincts are spot on, and Wolf is forced into action with the last person he wants by his side in a deadly battle — his only son.

When news of their disturbing episode travels through the valleys, local FBI agents want to take over Wolf’s investigation, hoping to halt murder and corruption originating 7,000 miles away in Afghanistan. Wolf ignores the FBI’s order to stand down, even if the case involves a matter of national security. Not when his son’s safety is at stake.

In this stomach-dropping, action and suspense packed third installment of the David Wolf series, Wolf partners with a beautiful FBI agent to bust an inter-continental conspiracy threatening anyone who has the bad enough luck to stumble on it.

8 Tested Strategies for Free Traffic Generation: Get Free Organic Traffic to Your Websites by A. Essaily

Mastering Life after Athletics: 10 Tips for At Risk Teens, Athletes and Aspiring Entrepreneurs by Byron Williams