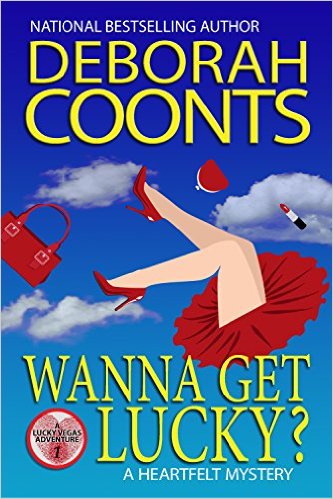 A young woman plunges from a Las Vegas sightseeing helicopter, landing in the Pirate Lagoon in front of the Treasure Island Hotel in the middle of the 8:30 Pirate Show. Almost everyone writes her off as another Vegas victim. But, Lucky O’Toole, head of customer relations at the Babylon mega casino, smells a rat, though she’s got a lot on her plate: the adult film industry’s annual awards banquet, a spouse-swapping convention, sex-toy purveyors preying on the pocket-protector crowd attending ElectroniCon… Still Lucky can’t resist turning over a few stones.
When a former flame is one of the snakes she uncovers, Lucky is certain the woman’s death was no Sin City suicide. To top it all off, Lucky’s best friend, Teddie–Las Vegas’s finest female impersonator–presses to take their relationship to the next level. Leave it to Lucky to attract a man who looks better in a dress than she does.

Lucky must manage the Babylon’s outrageous festivities, solve the crime, and struggle to keep her life and libido from spinning out of control.