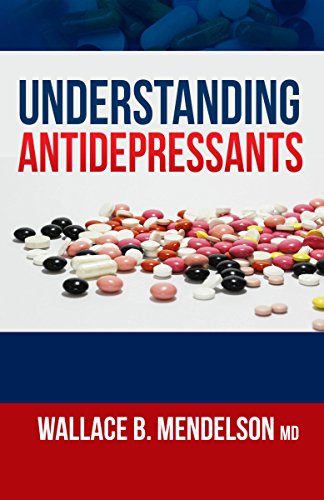 New update: Now includes two new antidepressants approved by the FDA in March 2019: esketamine, taken as a nasal spray, for persons who have not responded to previous medicines, and brexanolone, the first antidepressant specifically for postpartum depression.Overview: About 16 million Americans experience a major depression each year, and at any given time about ten percent of the population is taking antidepressants. The popularity of antidepressants is increasing rapidly: there are about four times as many people taking them than in the 1990s. There are many different ones available, in what can seem like a bewildering variety. In this book, Dr. Mendelson suggests that understanding the science of how antidepressants work in the body can help in a number of ways. First, it helps in making a wiser choice among them. Secondly, it makes sense of things. If one realizes that a particular antidepressant also has the qualities of an antihistamine, for instance, then it makes sense that it might also lead to sleepiness. Finally, it helps change a person’s approach about being depressed. It’s natural to feel that one is a recipient of this very painful kind of suffering, and then a recipient of a treatment. It may seem like there is not much to be done about it. In fact, there are a lot of options. By understanding more about these medications and their alternatives, it’s possible to take a more active stance and participate in the choice of treatment, and that’s an important first step.This book begins with a non-technical, lavishly illustrated introduction to how antidepressants affect the brain, and a more general presentation of how drugs are absorbed, distributed, and eliminated from the body. The second section describes the various classes of antidepressants, including how they work, how long they stay in the body, their interactions with other medicines, side effects, and things to consider when choosing a particular one. The third section provides guidance if things are not improving, such as changing or adding medicines, as well as non-medication alternatives including psychotherapy and transcranial magnetic stimulation. Finally, there is a presentation of related depressive disorders such as seasonal affective disorder, dysthymia, and premenstrual dysphoric disorder.Written with both scientific rigor and compassion, Understanding Antidepressants is a useful guide for anyone suffering from depression, as well as their families. It is written broadly enough to be a helpful introduction for students and trainees, and mental health workers with non-technical backgrounds who wish to learn more about these commonly used medications.About the author: Wallace B. Mendelson MD is a Professor of Psychiatry and Clinical Pharmacology (ret) at the University of Chicago, and a Distinguished Fellow of the American Psychiatric Association. He has authored or co-authored four books and numerous scientific papers, primarily in the fields of psychopharmacology and sleep medicine. His most recent book, The Science of Sleep (available on Amazon), shares with Understanding Antidepressants the goal of providing the scientific background of a group of disorders in a non-technical and very readable manner.

End of Eternity by Loretta Lost