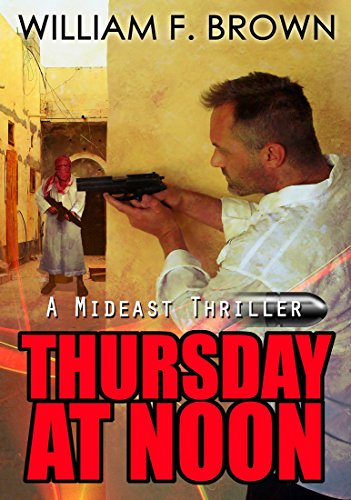 Treachery and double-dealing are the rule in this spy vs spy thriller. A dead Mossad agent, Nazi rocket scientists, the Moslem Brotherhood, a corrupt American ambassador, and two missing Egyptian tank regiments – somebody’s trying to start another Arab-Israeli war.Richard Thomson is a burnt-out CIA agent who the Agency dumped in Egypt because they couldn’t think of a worse place to send him. Already gnawed on by Langley and set-up by the Cairo police, his day can’t get much worse, until someone leaves a dead body on the rear steps of his hotel with its head lopped off like a ripe melon.A message? No doubt about it. The body belongs to Mahmoud Yussuf, a fat, petty thief and wannabe spy who is peddling photographs of a long-abandoned RAF base in the Egyptian desert.While the world focuses on Russian missiles in Cuba, no one notices the ones being rolled out in the Egyptian desert pointed at Israel, no one, except Thomson.Alone and on the run, no one believes his story — not the CIA, the US Ambassador, and most assuredly not Captain Hassan Saleh, Chief of the Homicide Bureau of the Cairo Police, who wants to hang Thomson for murder.Like Night of the Generals, this is a murder mystery wrapped inside an international political thriller. Tick Toc, Tick Toc, it’s all going to start at Noon on Thursday, unless Thompson can stop them.This Cold War spy thriller will sweep you back to when John Kennedy was in the White House, Nikita Khrushchev ruled the Kremlin, and Abdel, Gamal Nasser sat precariously in Cairo, threatened by the radical Islamist fringe of the Moslem Brotherhood.If you’re looking for a good beach book or something to curl up with in front of the fire, this fast-moving conspiracy thriller is from the author of Burke’s Gamble, Burke’s War, The Undertaker, Amongst My Enemies, Thursday at Noon, and Aim True, My Brothers, with over 500 Kindle 5-Star Reviews. Enjoy!

The Ones Who Were Chosen: Volume 1 (The Guardian Series) by Author Lady Lilium