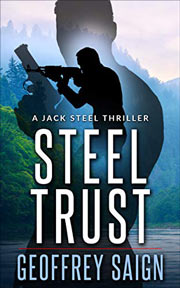 Terrorists plan to kill millions of innocents in the U.S.

Jack Steel is the last man who can stop them.

Called back from the hellish landscape of Afghanistan to join the covert Blackhood Ops group, deadly special ops veteran Jack Steel is immediately thrust into action for Operation Hellfire.

Worse, Steel has always made a career out of protecting the innocent, and he faces an overwhelming desire to save an innocent child. He knows what his orders are, he’s just not sure he can follow them. Millions of lives hang in the balance, along with Steel’s conscience.

Readers are saying about the Jack Steel series…

“A superior thriller series, the likes of which I haven’t seen since Robert Ludlum (Bourne Identity).”

“This is a must-read, that gives stiff competition to any other better-known mystery/thriller authors.”

“If you relish well-written spy novels with a great plot and realistic characters and action, read Jack Steel by Geoffrey Saign.”

“I’m calling it now: Jack Steel is the next great spy series.”

“Jack Steel is one bad dude…with a compelling human side to his character.”

Discover the series that readers are calling part Reacher, Rapp, Bourne and all action.

Get your FREE copy now!

Oscar: The Friendly Rottweiler: The Dog That Will Change The Perception Of A Breed by David Lees

Song of the Severed Lord (The Dreambetween Symphony Book 1)