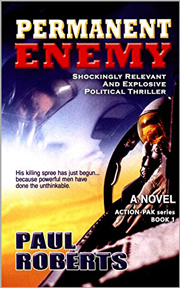 Set in Washington, D.C., Egypt, sub-Sahara Africa, and Corsica, it’s about a secret mission to end genocide, but it quickly turns into a bloodbath in the African jungle. Among the explosive secrets uncovered by a betrayed and badly shot-up CIA commando, Brett Collins, is the funding of Ethnic Cleansing in Africa with American tax dollars by a fraternity of corrupt and powerful politicians, in exchange for millions of dollars in kickbacks!

Rescued and nursed back to health by a stunningly beautiful British intelligence agent, Agatha Cornwell, with whom he falls madly in love, Brett Collins sets out to accomplish his mission. To succeed, he must first wage a secret warfare against the enemies within – before they carry out an assassination plot against a United States president for attempting to resolve a genocide campaign from which they’re profiting. Inspired by actual, true-life events, Permanent Enemy is a bullet-fast, action-packed international thriller, filled with nail-biting suspense and stunning surprises. It’s the first novel in the Action-Pak series by novelist and filmmaker, Paul Roberts.

Get your eBook copy now!

When You’re Ready (The Ready Series Book 1) by J.L. Berg

Summer in Sorrento (Escape to Italy) by Holly Greene