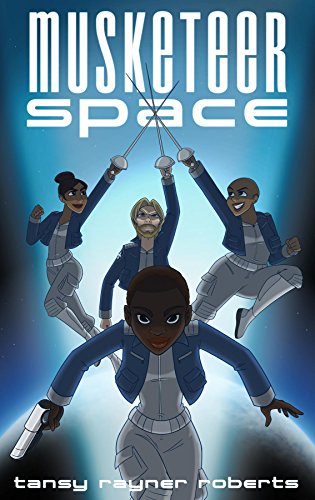 “I haven’t got a blade. I haven’t got a ship. I washed out of the Musketeers. If this is your idea of honour, put down the swords and I’ll take you on with my bare hands.”

Dana D’Artagnan longs for a life of adventure as a Musketeer pilot in the Royal Fleet on Paris Satellite. When her dream crashes and burns, she gains a friendship she never expected, with three of the city’s most infamous sword-fighting scoundrels: the Musketeers known as Athos, Porthos and Aramis.

Even as a mecha grunt, Dana has a knack for getting into trouble. She pushes her way into a dangerous political conspiracy involving royal scandals, disguised spaceships, a tailor who keeps getting himself kidnapped, and a seductive spy with far too many secrets.

With the Solar System on the brink of war, Dana is given a chance to prove herself once and for all. But is it worth becoming a Musketeer if she has to sacrifice her friends along the way?

MUSKETEER SPACE is a gender-swapped, thoroughly bisexual space opera retelling of Alexandre Dumas’ classic novel The Three Musketeers, which was originally published as a weekly serial on the author’s website.

GABACHO: Drugs Landed Me In Mexican Prison, Theater Saved Me by Richard Jewkes and Brian Whitney