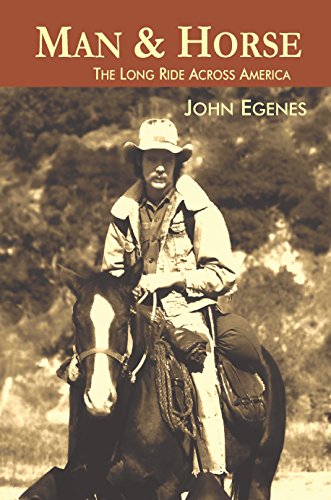 In 1974 a disenfranchised young man from a broken home set out to do the impossible. With a hundred dollars in his pocket, a beat up cavalry saddle, and a faraway look in his eye, John Egenes saddled his horse Gizmo and started down the trail on an adventure across the North American continent. Their seven month journey took them across 11 states from California to Virginia, ocean to ocean.. As they left the pressing confinement of the city behind them, the pair experienced the isolation and loneliness of the southwestern deserts, the vastness of the prairie, and the great landscapes that make up America. Across hundreds of miles of empty land they slept with coyotes and wild horses under the stars, and in urban areas they camped alone in graveyards and abandoned shacks. Along the way John and Gizmo were transformed from inexperienced horse and rider to veterans of the trail. With his young horse as his spiritual guide John slowly began to comprehend his own place in the world and to find peace within himself. Full of heart and humor, Egenes serves up a tale that’s as big as the America he witnessed, an America that no longer exists. It was a journey that could only have been experienced step by step, mile by mile, from the view between a horse’s ears.

“What a genuine piece of writing! And what a pleasure to read a work that wasn’t pretentious or self-aggrandizing, but that was, in fact, just the opposite. An authentic piece of Americana from a period that doesn’t seem that long ago… Everyone needs to read this book. It is a modern classic.” ~Amazon Reviewer

Physician: How Science Transformed the Art of Medicine by Rajeev Kurapati