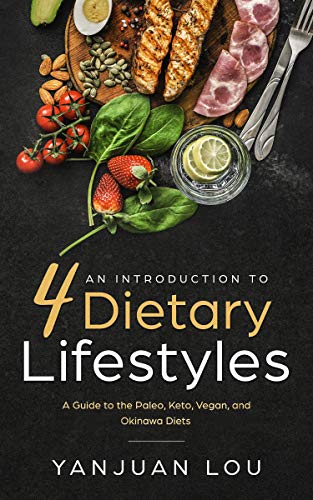 ☆☆☆Buy the paperback version and receive the e-book version FOR FREE☆☆☆
Imagine a world where everyone had a healthy and beautiful body.Imagine a life where there was no more wondering about what to eat.Imagine stepping into virtually any restaurant in the world, while on a diet, and walking out with complete confidence that you have remained faithful to dietary commitments.Imagine a diet book that doesn’t insult your intelligence along the way or assume that you are a fitness junky.You don’t need to imagine these fantasies any longer, because now they are a part of reality!The latest book by Yanjuan Lou, An Introduction to Four Dietary Lifestyles; A Guide to the Paleo, Keto, Vegan, and Okinawa Diets, is the type of book that the dieting industry has long feared exploding onto the scene.The majority of us lack the time, money, or knowledge to figure out which diet would work best for our body types. In today’s busy world, the last thing anyone wants to do is give up their precious free time to sign up for a months-long course just to learn a thing or two about nutrition. Thankfully, Yanjuan Lou has skipped through the confusion for us.Everyone who has any interest in dieting has already heard about the paleo, keto, vegan, and Okinawa diets – but very rarely are these diets explained in full without bias towards one over the other. It’s no secret that every diet under the sun won’t work for everyone, and Yanjuan Lou has put together a comprehensive guide to each diet without pulling any punches or playing favorites. She leaves the final choice up to you for which diet you want to commit to, and whichever diet you chose, Yanjuan’s advice remains as practical and poignant as ever.If you’ve struggled to stick with a diet in the past or didn’t know which diet would work best for you specifically, then stop fantasizing about finding the right book to help you, because it is in your hands right now!What you will learn inside this book:★The ins and outs of four of the most popular, yet misunderstood, diets being talked about today!★Why most people do not succeed when going on a diet, and how to make sure that doesn’t happen to you!★An explanation of the metabolic state called ketosis, broken down and described in a way that anyone can understand!★Meal plans for the paleo, keto, vegan, and Okinawa diets!★How to eat out at a restaurant and still maintain your diet!

In Favour of Fools: A Free Science Fiction Comedy (These Foolish Things Book 1) by J Battle

Tales From Portville by Marek Záhorec

The Boat Man: A Suspense Thriller by Dustin Stevens