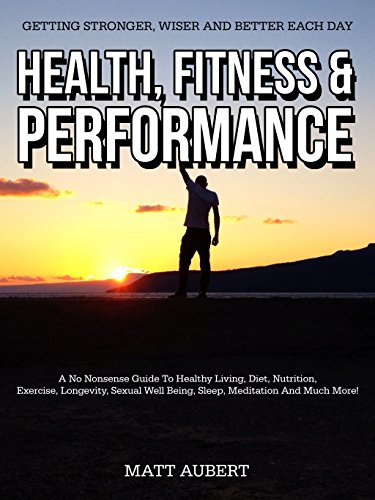 A No Nonsense Guide To Healthy Living, Diet, Nutrition, Exercise, Longevity, Sexual Well Being, Sleep, Meditation And Much More!

I wrote “Health, Fitness and Performance” based on so many people hard at work and are really trying to get “ahead” in life with this health/exercise thing BUT are failing miserably. Not being harsh but those are the facts.

I competed in bicycle freestyle contests growing up which helped me stay in shape. Upon graduating high school I joined the military and my physical fitness really started taking off. Every morning physical training took place with the troops and running a minimum of 2 miles daily!

After serving my country I also became a certified personal trainer at Bally Total Fitness in Atlanta, GA where I trained literally hundreds of people. Old, young, experienced or inexperienced, it didn’t matter. My job was to help them achieve their fitness goals and that’s exactly what I did.

Now my services were not free nor were they cheap. But honestly if I wasn’t there to help some of them they might not have done anything!

My first workout with them was always free which gave them a chance to see what I could do for them. Sort of similar to test driving a car or trying on an outfit.

This is where I would find out if they had previous injuries or what medications they took which is typical with any training program. Finding this information out was critical and part of being a personal trainer. At the end of the session I would discuss prices for the different training packages which went upwards of $5,000 for 48 sessions.

Invariably they would many times say they didn’t have the money or could not afford it at the time. But little did they know while I was questioning them that first hour before training them I was building my case. I would ask if they smoked, how many times they went out and had some drinks or just out to eat. While they were talking I was adding this stuff up!

Guess what? They DID have the money but it was going to other things such as cigarettes, eating out and drinking some adult beverages! Don’t get me wrong we all need to enjoy life but not at the expense of $500-1000 a month!

As I was interviewing them about their physical goals I would interject a question here and there concerning their lifestyle which gave me insight on where their hard earn dollars were truly going. Funny thing was they didn’t even realize how much they were spending on this stuff!

Once I explained their situation to them and put them into the context then they would say “Wow I never knew I spent that much money on this stuff”. Next they would sign up and purchase training.

The Omarian Gambit: A Pax Aeterna Novel by Trevor Wyatt