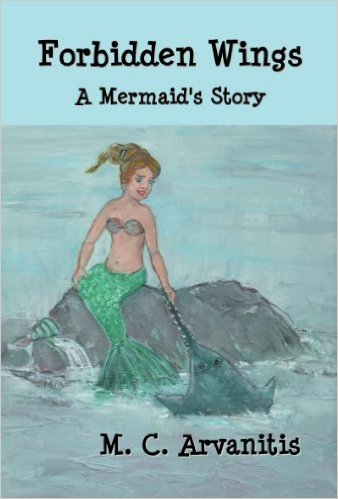 Nadeea is shorter than the other Mermaids and finds life unbearable. She meets two fairies, Cassandra and Alex, and admires their beautiful wings. She wants wings for herself so she can escape from the teasing she receives from the other Mermaids. When Sir Cecil, the Snerg, promises to help her find wings she agrees to go on a long dangerous journey to Wyre, the home of the Damselflies. Sadie Squarette, a magic-making, bug-like poet, is their guide. They cross the Island of Egilssay where she meets Zasta, a Selkie, who becomes her best friend. There is danger in the island however. They must cross the land of the Trows where a mighty battle is going on between the Sea and Hill Trows. Trows not only kill each other, they kill anyone who crosses over their land. Sadie uses her unique magic to save them. Finally they reach the Island of Wyre where Nadeea hopes to get wings. She bravely faces Gwilon, the Goat Witch, and saves the queen of the Damselflies. When she learns that her Mer family has been captured by the dreaded Sea Lions and taken into slavery, she has to make a decision. Will she wait for her wings or leave with the Selkie Army to rescue her family?