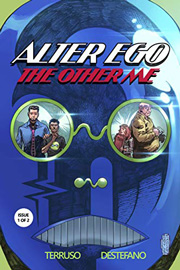 Would you help kill the world’s only superhero if the price were right?

Self-centered sleuth Chris Club despises Blue because he failed to rescue Club’s only friend. So when Club gets recruited to uncover Blue’s secret identity, he jumps at the chance, hoping to prove to the world that whoever’s behind the mask is a villain.

Club’s psychotic boss, an actual villain, wants to kill Blue—not for some grand scheme, just to make the whole world sad.  The invulnerable superhero with the decapitating uppercut has no reflection, only comes out at night, and never leaves the Centro city limits.

As Club unravels the mind-bending truth about who and what Blue is, he learns Blue truly is a good guy, and starts to care about him. And he realizes if he doesn’t betray his boss, Blue’s blood won’t be the only blood on his hands.

Half novel. Half graphic novel. A visual mystery you’ll obsess over.

Be Calm Now: a lighter mind